This month the theme for the travel link up is perfection. I’m not your usual blogger crafting short pieces bubbling over with champagne ideals and Instagram bliss. I can’t even remember to remove my mascara at night, so creating a facade of perfection on my blog is waaaay outta my reach. No, today I’m gonna tell you guys the story of the perfect pickpocket.

What does that even mean? Well, it means that no one got hurt, no one got robbed and no major injustice sits in the back of my mind wallowing in bile, just waiting for the opportunity to rise to the forefront of my subconscious and wreak bloody revenge.

Wow, reading that back this sounds like it’s going to be a fairly pathetic blog post. Too bad, I’m committed now. I’m going ahead with my tale of attempted criminal deviance.

My story is set in Switzerland, Geneva to be exact. Yes, though I’ve visited many places where the gap between rich and poor is stark and obvious, and where the streets are filled with possible candidates for a modern day retelling of Oliver Twist, the only place I’ve ever had any trouble with crime is Geneva.

It was New Year’s Eve. The night where everyone feels some kind of societal pressure to party while knowing their reality will almost certainly be somewhat disappointing. I was in Geneva with my husband and we’d decided to go out to find a bar and a few alcoholic beverages to help the evening slip by.

We’d found a cool little spot and enjoyed a tipple. My husband had really liked the Swiss beer he was drinking and wanted to remember the name of it so he could order it again another day, or possibly purchase a case once we returned to London. Did he write down the name in his phone like a normal person? No, he nicked a branded coaster from the bar.

It was time to move to a new location. It wasn’t quite midnight yet and our cool little bar had become crowded and noisy. I hate people. I hate to party. Who wants social engagement and fun when they can have panda mascara? We decided to find some place a little more low key nearer our hotel.

Now, for those of you who know nought about Geneva, there’s a lake. A big old body of water with a big jet shooting out of it and a bunch of bridges across it as it feeds into the Rhone river. If my powers of description fail me, check it out on a map, you’ll understand.

We were walking across one of these bridges when two young men approached us in the darkness. The rest of the bridge was deserted. They babbled away to us jovially, paying most of their attention to my husband and soon discovering that he is not a Francophone. They were not Anglophones, but they knew a few choice words that seemed to convey a feeling of merriment and celebration. “New Year” “Bonne-année-party” nonsense like that. 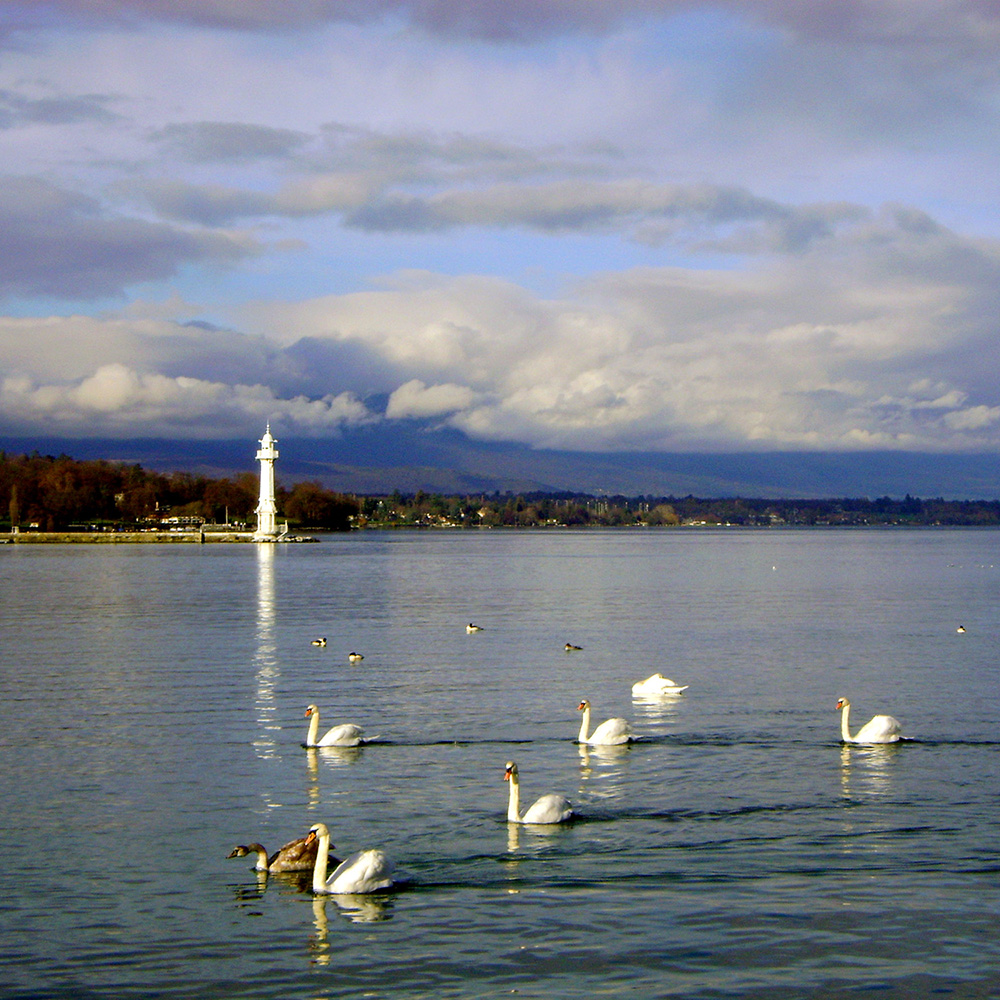 When venturing out in Geneva, always take a posse to back you up

They were excitable. We were not as enthusiastic as they were. They didn’t let that stop them. They danced around us like children, before moving in and enveloping my husband in a double bear hug. This was awkward for me, so I moved a few steps away from them. I did not want them touching me.

I could see that my husband was not reciprocating their affection. He had his arms clenched firmly to his person and was doing his fake laugh. I recognised this laugh. It’s the laugh he does when he thinks you’re a dickhead but he’s trying to put you at ease.

It began to look like these likely fellows were trying to grope my man. The whole thing was going on for far too long and their minimal happy-party-year conversation was wearing thin. Eventually my husband wriggled away and they seemed to give up. We legged it, shouting back insincere hopes that they would have a good night as we power walked.

I turned to my husband and said, “what the hell was that about?”

He stared straight ahead while still moving swiftly through the night, determined to get us back to a more populated area of town. “They were trying to steal my coaster.”

Whoa. Those bastards. Basically their “hug” was a thinly disguised attempt to search his pockets and plunder his valuables. Except, this was my husband they’d attacked. A man with a negligible thirst for material possessions and terrible shoes to match. He had a mobile phone in his breast pocket, the one inside his coat that was much too difficult for the thieves to reach. He had a cheap compact camera in one of his side pockets and the coaster in the other.

He had managed to block access to the camera with his arm, but the thieves had become intrigued by the coaster. Perhaps they though it was a wallet. Whatever they suspected it was, they knew that their mark (my Mark!) was holding onto it with a grim determination and this made it all the more worth pillaging in their minds. Well, they failed.

As we fled the scene of the hugging we maintained possession of our highly sought after 10cm square section of branded cork. We won.

Choosing to ransack Mark was clearly the wrong decision. He had nothing on him because I had it all in my handbag. Money, credit cards, ID, phone etc. We think they choose him instead of me because in an older man, younger woman situation they assumed the man was more likely to have the cash. Aside from being thieves they were also sexists.

Let this be a warning to you all; sexism in the workplace never pays. Even if your workplace is being a street thief.

And before you ask, no we don’t have the coaster in pride of place in our flat. We got back to London and promptly lost it. Hardly worth the hassle. 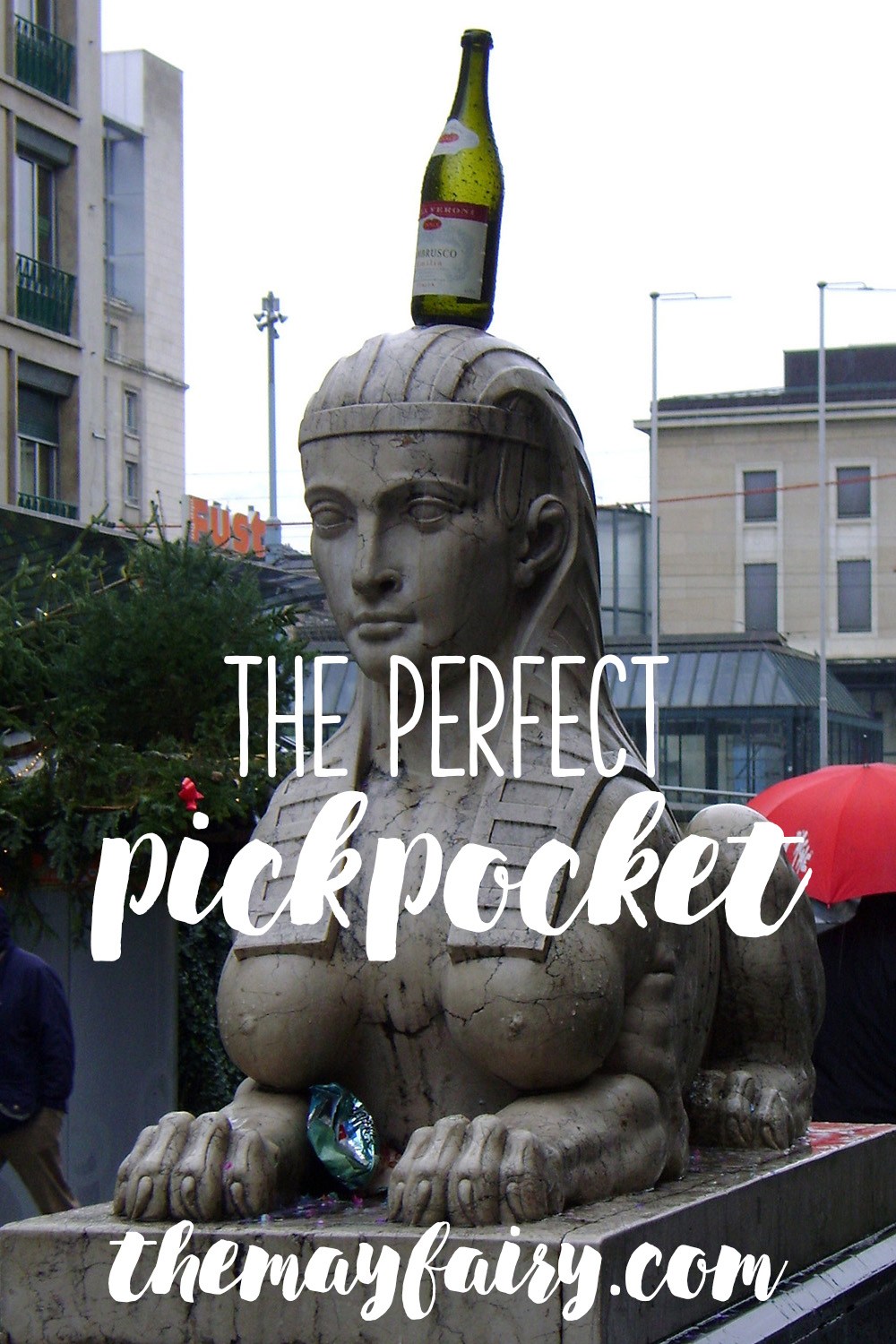 This post is part of a travel link up. This month the topic is ‘the perfect (blank)’. Join by adding your post to the widget found on Emma’s or Angie‘s blog before 7 November 2016.