I went to a family wedding in November, which as we all know is an excellent opportunity to have a few too many adult beverages and make a tit out of yourself in front of people who know you well enough to make your life awkward for the next five years, but not well enough to join in with your titty behaviour.

This whole blog is usually just me going on a bit about ways I embarrass myself, and this post will be no exception. However, I do pride myself on being able to embarrass myself in ways that surprise you. I like to keep my readers on their toes, buttocks clenched in anticipation.

So, when I tell you that at this function (my stepson’s wedding) I sat at the table with not just my husband and the bride’s parents, but also my husband’s ex wife and her parents you may think to yourself that this is going to be an obvious ‘case of the ex’ situation. A snark fest conceived within the grotty bedsheets of my husband’s romantic history, perhaps. Well, you’d be wrong.

I love my husband’s ex-wife, Senga, and her family. We hang out, we message each other, we giggle. In fact, one might say that it was the ease with which I gleefully swilled Prosecco with her parents, Mark’s ex-inlaws (or outlaws, as he prefers to call them) that got me into this mess in the first place. We were going well.

This was my first time meeting Senga’s sister, Karen. To the casual Prosecco fuelled observer Senga and Karen are quite similar. Similar expressions, similar mannerisms, both good at chit chat and cynical chuckles. This made me a fan of Karen from the start. However, my blood alcohol level made it easy for me to merge my relationship with Senga into my new found relationship with Karen and make the whole thing a little over the top and over familiar. Let’s have a look at a scientific break down of the situation: 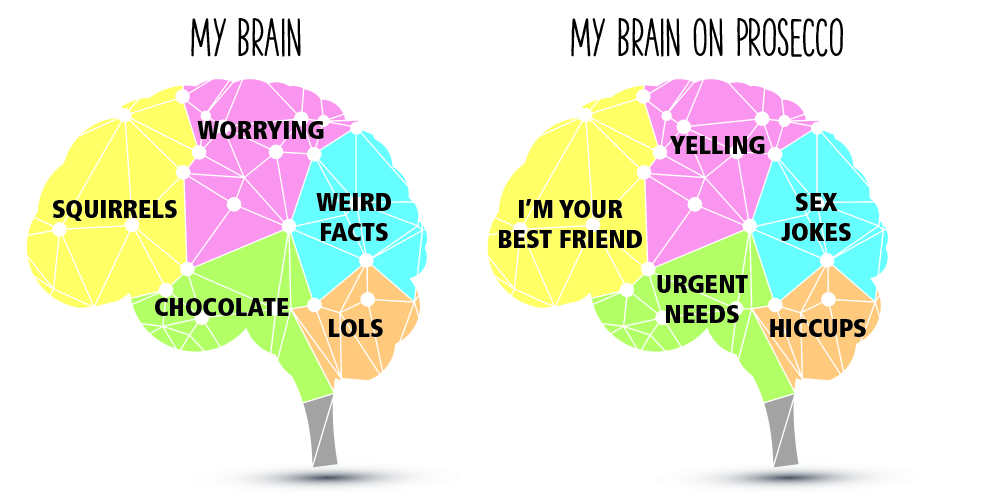 So, you can see here that my yellow lobe quickly abandoned my usual squirrel preoccupation and went into hyper-bonding. This was reasonably fine until I discovered the instant-print-camera table down the back. There was a Polaroid-esque (not sure if that was actually the brand) camera and a few boxes of film set up so guests could take pics and put them in the guest book with a message. I was obsessed. It was the best thing that had happened to me all day and this was a day that had included cake, cheese and the aforementioned Prosecco.

Mark and I took far too many Polaroids and then I decided to make it my mission to ensure that everyone else I knew went down to the Polaroid table. This was the best thing that had ever happened to me, remember. I told everyone. I physically shuffled people down the back so I could be their designated photographer, that’s how much faith I had in my abilities using this camera I had first picked up only ten minutes earlier.

Obviously this included Karen and her family. GO NOW TO THE BACK OF THE ROOM THIS IS THE BEST THING EVER. My purple yelling lobe gets excited. Once we get to the camera and wait for our turn we realise the current film cartridge is spent. No problem, there’s a whole box of new cartridges right there on the table. I pop open the back, unwrap a fresh cartridge and click it into the camera. Close it up, yell some more to get people to pose the way I want them to, then *click*.

We wait with anticipation. No word on whether any buttocks were clenched. Nothing happens. Ok, I must not have clicked properly. Oops, maybe I’m a little sloshed. Ah, we laugh. I pose everyone a second time and this time I click really very hard indeed. Again we wait. Again, nothing. I shake the camera. If that Outkast song taught us anything, it’s that shaking is really very integral to the Polaroid process. I didn’t know it had to happen before the photo even popped out of the camera, though.

We tried a third time but no one really believed I knew what I was doing by now. Ok, maybe I shoved in another used cartridge instead of a fresh one? No, I unwrapped it, can’t be that. I open up the back to have a word with this non-complying wad of film. I decide to take it out and put it back in again, the analogue world’s version of turn it off and turn it on. Wait, what’s that? I can’t get it out? It’s wedged stuck in the camera. I’ve fucked it all up for everyone now.

Christ. I’ve put the cartridge in backwards. How the hell does this even happen? Why would the camera accept this going in if it won’t let me get it back out again? HOW? Surely this is against the laws of physics?

A small child appears at my side. She is Karen’s daughter and she has this exact camera at home so she is now our designated expert. Holy fuck guys, I have in one Prosecco-goggled misadventure become one of those aging imbeciles that needs a small child to explain basic technology to them. I may not be a photographer of great note, but I have actually been paid to take photos for people on numerous occasions, which confers some kind of professionalism to my skill level, surely. Yet here I am being schooled on the basics of not destroying a camera and how to load film by a child. Oh, how the drunk and overconfident have been chastised.

My husband wanders over to the scene of the havoc. A crowd is beginning to gather around us wondering why they can’t use the camera yet and Mark can smell the anxiety. He can see I need a hero to swoop through in the third act to save me from destroying the delicate yet jovial familial bonds he has tended and strengthened over the years. These bonds have survived the tribulations of divorce, the raising of ginger haired children with an overabundance of rambunctious personality and thick Scottish accents that are best understood after a couple of stiff whiskys, yet this cocky bitch with a camera stands poised to raze the whole thing to the ground. Mark’s not gonna let that happen.

He ambles into the fracas and begins to ask what the hell’s going on. No time for that.I grab him by the shoulders and give him swift instructions.

“Get a bread knife. Now. We don’t have much time.”

Mark is used to saving me from my own stupidity. He’s also the kind of hero that excels at being a team player. He doesn’t hesitate for even a second, doesn’t question anything at all. Instead he flees in the direction of the bread knives. I don’t really know what direction that is, but that’s Mark’s quandary for the evening. I have faith in him.

Those around me were amazed at what they just witnessed. “He saw you’d broken the camera, you told him to get a bread knife and then he just runs off to do it, that doesn’t make any sense,” they gasped. They grew silent, it was as if they’d just witnessed Jesus and the Herding of the Cats (if that’s not a bible story, it should be). They’d known this man for many years, decades even, and if anyone could be described as the human personification of multiple cats being thrown into a fiasco, it’s Mark. Yet somehow the cats were our only chance to save the day, and the cats appeared to be doing as they were told. A miracle.

True to his word, Mark appeared back by my side with a bread knife. I put on my metaphorical scrubs and mentally prepared for camera surgery. I flipped open the back and dug the bread knife under the cartridge. As I wriggled the knife to gain leverage against my foe, I heard a sharp intake of breath from my still growing audience. They thought I was done for, if I hadn’t broken it yet I was certainly doing so now. Fuck it, there was no Plan B. I had to keep going.

The gentle click as the cartridge popped out of the camera fully in tact and without even superficial damage to its host carried with it my redemption. I had won. I had wasted a decent chunk of everyone’s night but let’s not dwell on that. Unfortunately, I had not escaped unscathed and had somehow managed to scrape a decent amount of skin off each of my knuckles. Don’t wait for me to explain, as I just don’t know.

With the photos taken I passed the camera on to the waiting queue. I even had a photo taken with Karen, to celebrate our victory over technology, our dominance of the photographic realm and to let it be known that if you drink enough Prosecco, a miracle can happen. 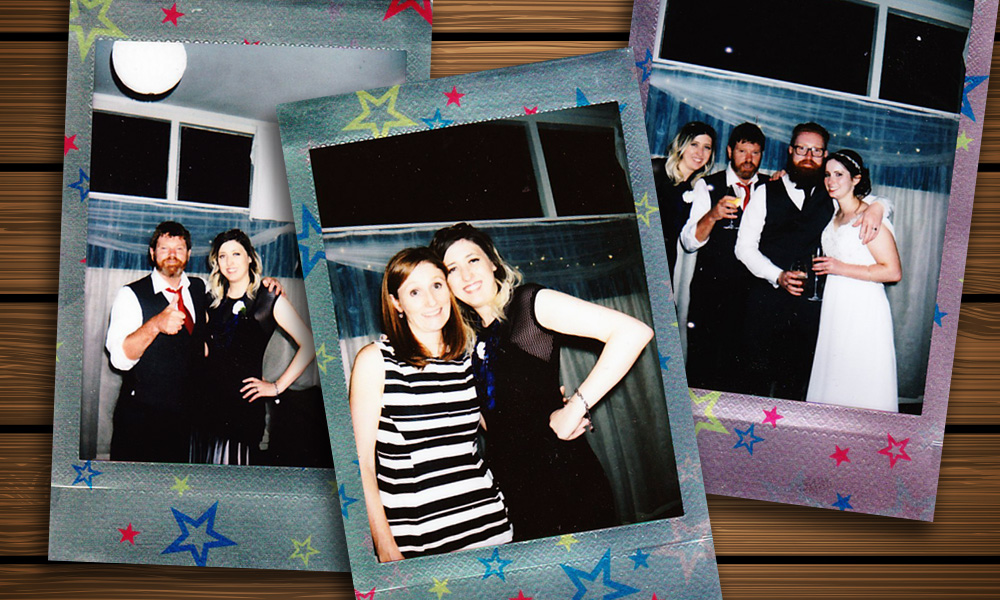 Credits: Brain graphic based on this:
Brain image by Freepik

How to know for sure if you should marry someone