The theme for this month’s Travel Link Up is “Hidden Gems”. Now, God’s Own Junkyard, a neon gallery and cafe, could kind of fit. It’s in Walthamstow. I’m never in Walthamstow. So that’s pretty damn hidden for me. However, it’s had rather a lot of publicity and appeared on everyone’s blogs already, so I’m hardly breaking any new ground or giving you any new, hot travel tips. But I wanna deep dive this one. Coz there sure as heck was a hidden gem inside for me. 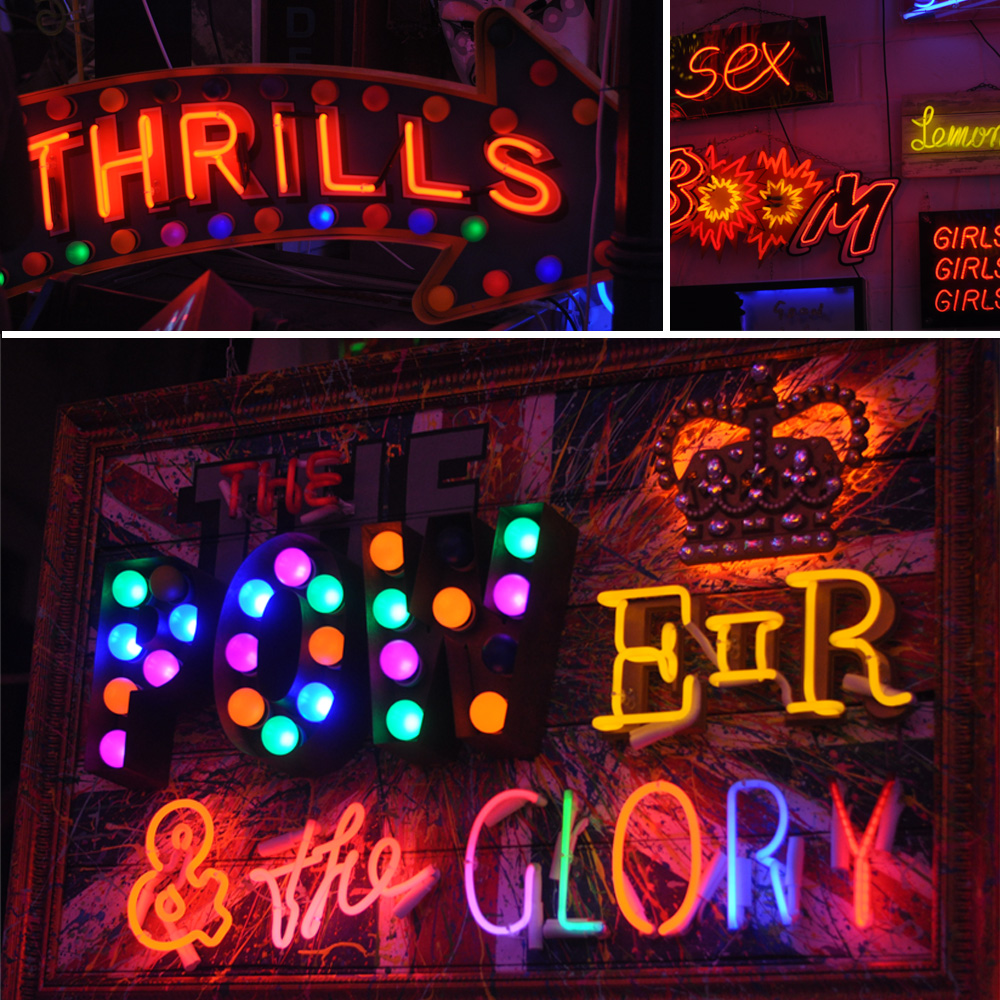 As I just said, everyone in Blogdom has visited God’s Own Junkyard. It’s a sea of neon gorgeousness and the moment it beamed through the internet at me I knew I would love it. That doesn’t mean I made any effort to visit though. I saw it was far away, put it in the future-possible-to-do box, and went back to my daily schedule of ice cream and internet.

It wasn’t until my lovely friend Gianni said to me, “we’re going” that I realised that I was actually going.

As mentioned, I never have cause to be in Walthamstow. This meant taking the tube on a weekend. This meant sorting out a podcast playlist on the iPod because weekend tube-takers are so noisy that I can’t read. Unfortunately, I messed up the podcast transfer process, and had to wing it as I stood on the platform trying to figure out my listening decisions for the hour ahead of me.

I ended up listening to a random podcast about Abraham Lincoln. This led me on a journey of self discovery about cremation that I didn’t know I needed to take, but had begun years earlier. I’ll explain.

God’s Own Junkyard is quite a walk from the tube station and it took Gianni and I past a graveyard with wonky headstones, crypts and big concrete sarcophagus type dealies (what are those called?).  Some with giant cracks through them, like someone is trying to break free. This is when I knew I had to get it all out.

“When I die, cremate me, I don’t want people poking my corpse”.  Gianni is looking at me with a raised eyebrow wondering what she’s done to deserve this outburst.

It probably begins with Wuthering Heights. Remember that scene in the book where they open Catherine’s grave so they can bury Edgar, and Heathcliff demands to open her coffin so he can stare at her corpse? I have so many feelings about this book, but that part really skeeved me out. FFS Heathcliff, I was on my way to work and when I read that and I didn’t need to. It was then I learnt that I’m against poking corpses in a big fuck off way. Gradually I’ve realised that if you’re not cremated, then at some point someone is going to poke your corpse. 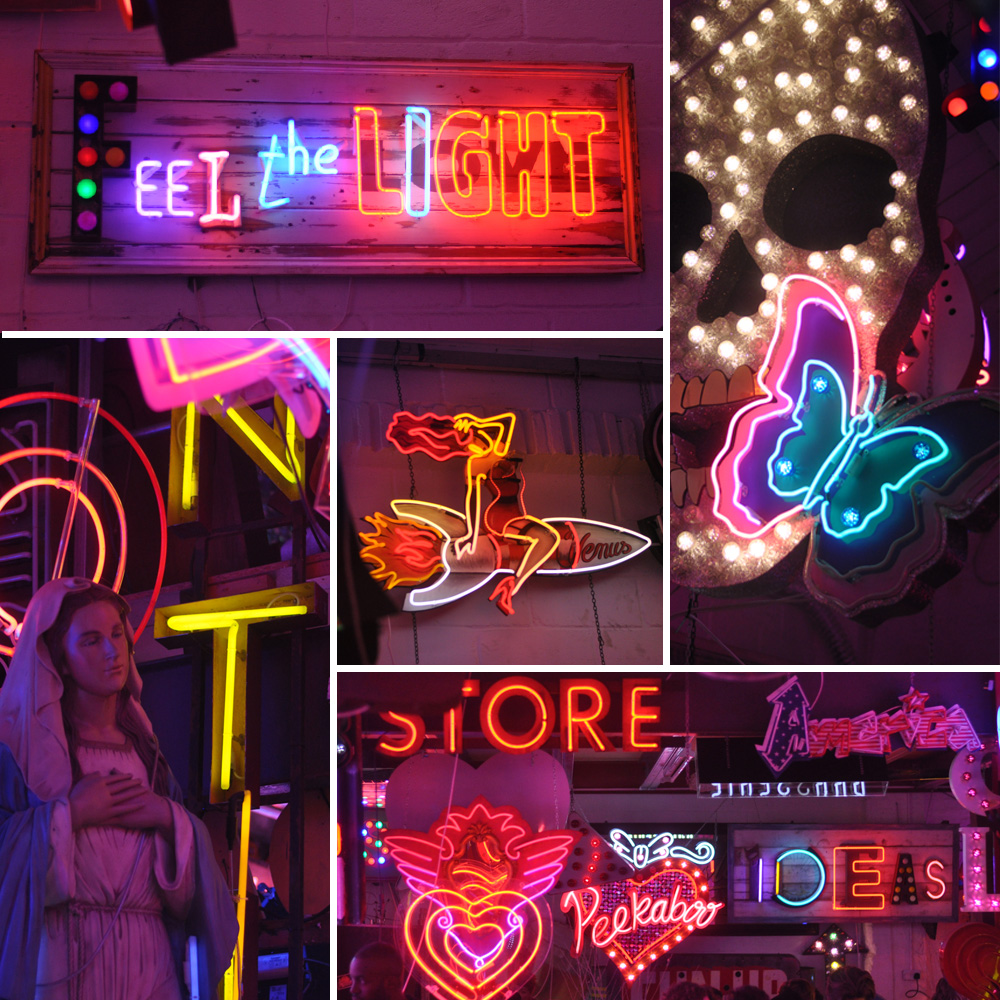 I’m explaining this all to Gianni and she’s being polite. She thinks I’m nuts, but she’s good people, so she doesn’t tell me to shut the fuck up. Look, it might take time, but really, I’m telling you, your corpse will be poked. Look at the ancient Eyptians – it took a decent chunk of time for some of them, but it happened.. If you’re famous it’s worse.  Any excuse to open you up and poke you and tell everyone all about it.

The thing is, I keep running into stories where this happens even though I’m not actively seeking them out. And for some reason they often involve US presidents.

I few weeks ago I was reading some historical blog or other and they spoke of some damage that was done to George Washington’s crypt. When they went in to fix it up and make it secure, what do you know, they opened to coffin and had a good nose around. Oooh, look at his skin, look at his face, his hair, his body, jot that shit down. FFS. Why did I read that?

Then, the Abraham Lincoln podcast I was telling you about, what do you think happened there? Well, someone tried to steal his bones to hold them to ransom, that’s what. So, after the attempt failed the bones needed to be secured. What did they do while securing the crypt? Open the coffin. Poke, poke, poke.

I swear I don’t go looking for corpse poking stories. They find me, then I sit around with crawling skin for weeks after the fact because the whole thing is just gross.

Gianni is just relieved that we’ve reached the neon junkyard at this point. We can stop talking about dead presidents being poked in their coffins. We go in and absorb the neon love. I’m snapping photos and having a merry time when Gianni calls over to me from a few metres away, “you have to come in this room, ok?” She’s emerging from a little cabin in the middle of the gallery.

All right, I agree to go in the room, but I’m quickly distracted by all the glowing sex signs around us. I’m easily distracted at the best of times, but put me in a neon gallery and I am Tiddles the Unherdable Cat blatantly ignoring your good suggestions. Click, click, click, I’ll just take a couple of pictures over in this corner before going into the cabin. Nope, Gianni walks over and stares me straight in the eye.

Shit. This is serious. I follow my determined American friend back to the little room and see neon Jesus glowing at me from inside, holding a gun in each hand. Lots of neon Catholic iconography greets me as I enter. So far, so good.

That’s when I see it. In the corner, out of the way. The neon coffin. It’s open. In it lies a clown, just ready for a poke.

You know who’s in the White House right now, right? Well, I can safely say, this clown president got the shit poked out of him from us both. It was our duty. 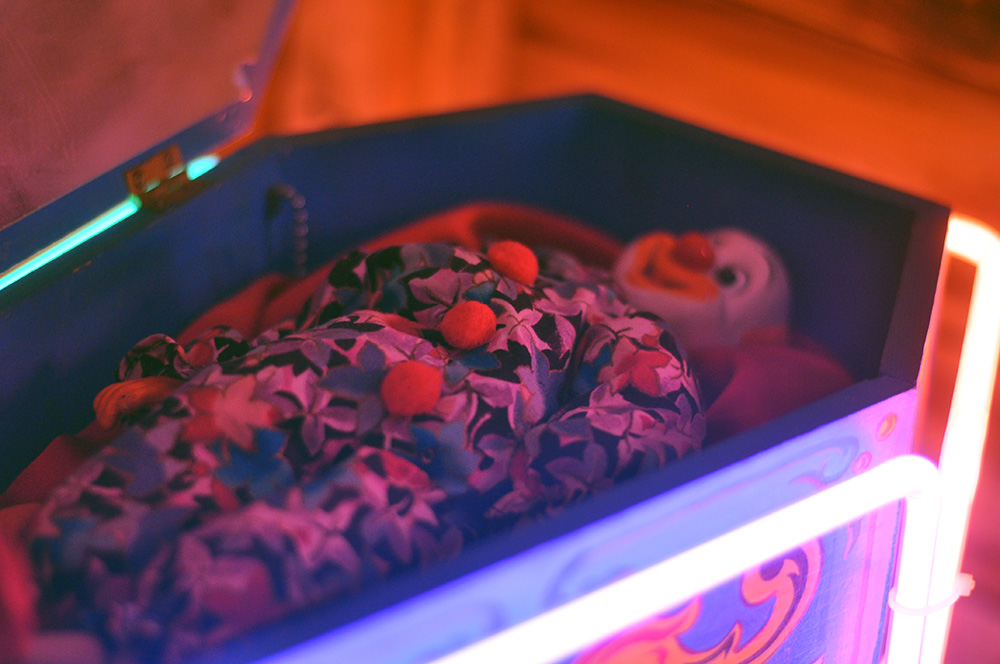 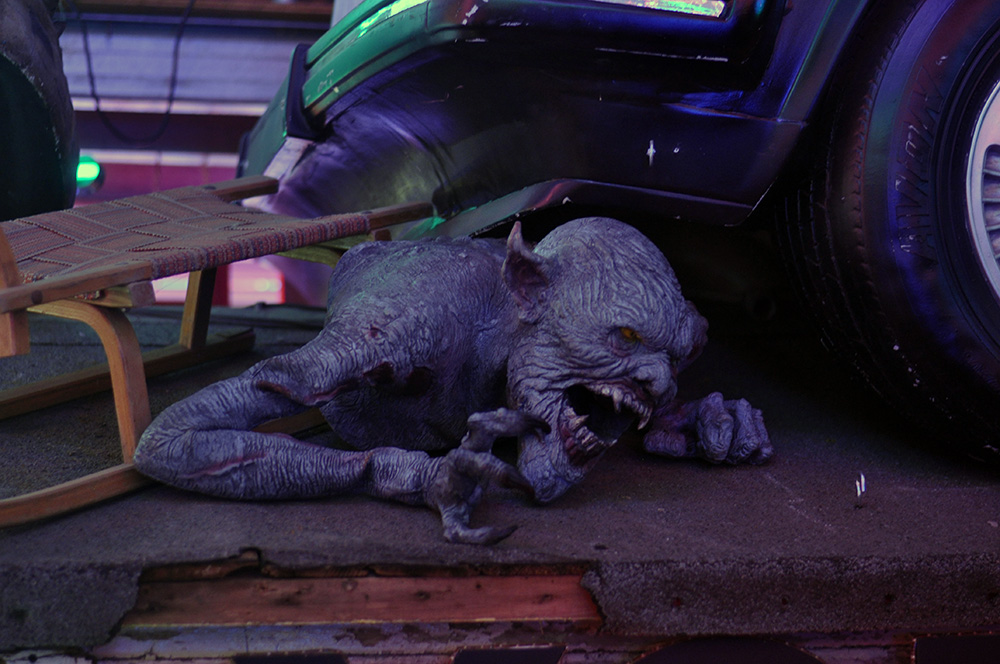 Join the Travel Link Up by adding your own “Hidden Gems” post to the widget found on Follow Your Sunshine, Adventures of a London Kiwi, SilverSpoon London, or A Girl and Her Passport from the 1st.

How to know for sure if you should marry someone