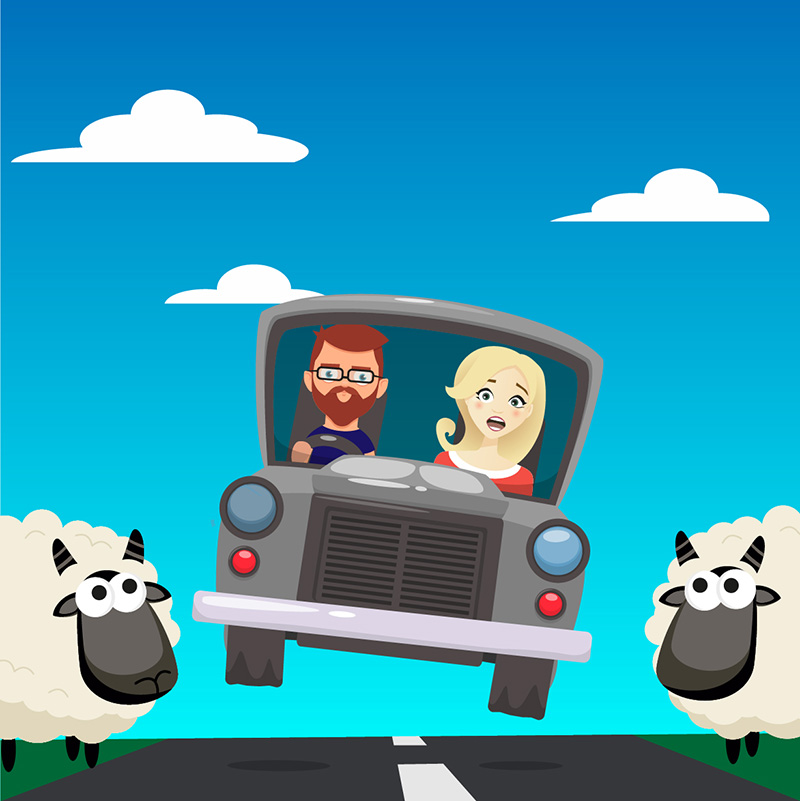 In New Zealand you kind of need to drive. There aren’t as many trains there as there are in Britain, especially not in the South Island. For bigger distances it’s best to fly. We did both of these and I have stories. Shall we begin?

Three days into our stay we flew from Christchurch down to Invercargill. We took a taxi to the airport via a visit to a family member. Same taxi driver for both drives. Nice guy with lots to chat about; a friendly chap who liked to laugh. He also had a death wish. For our entire journey he told us in depth tales about his close encounters with total annihilation. Usually wildlife-flavoured death. He’d visited those big cat enclosures in South East Asia and had almost been attacked. Multiple times. He bred dangerous dogs with hilarious consequences. He’d gotten married in a zoo and the monkeys had run off with his wife’s veil. He was desperately trying to book a shark cage experience. I’m sure there’s more but I’ve blocked it out.

There aren’t many animals that can kill you in New Zealand but I must have spent a good part of that car ride with my eyes peeled to the side of the road, sure that a kakapo with homicidal instinct and a knife in his beak was going to break through the foliage and come after this bloke to settle an old grudge. Or maybe a house cat with gun strapped to his back, rigged up so that it fired a round of bullets with every ten steps he took towards our car. Nothing would have surprised me at this point, this guy’s stories were getting out of control.

We were supposed to fly out around midday. Our flight was delayed so we waited in the boarding lounge. All the other regional flights came and went. At one point we were told to board, we went through the gates and were about to actually walk across the tarmac to our plane when we were asked to go back to the lounge.

That’s when we caught sight of our plane having a hole drilled in the roof and a man being winched through. Technical difficulties, apparently. Well, that’s new. At least they weren’t trying to turn it off and turn it back on again. Several hours later we went back to the tarmac for round two. This time we actually made it onto the plane and took our seats before they brought the pilot out to chat with us.

It appears that the wind had blown the cockpit door shut while they were getting the plane ready, and it had jammed with such force that it was impossible to open again. They tried really, really hard. The only thing for it was to drill through the roof, bang it open from the other side and re-pressurise the cabin, which all takes time, so we’re told.

I heard mutterings of “Monty Python Airways” from the other passengers, but whatever. I just wanted to get this hour and a half flight out of the way. It was an ATR propeller plane, which means no entertainment screen, no USB port to charge your now dead phone, no survivors in the event of a crash. Haha. Look at me joking about crashing from the safety of my living room.

We did, however, get cookies. Cookie Time cookies to be exact. The best goddamn New Zealand chocolate chip cookies from my childhood that are just jam packed with GIANT pieces of chocolate. These were white chocolate cookies and I usually despise that imposter bullshit masquerading as my fave cocoa treat, but if anyone can make white chocolate nommy, it’s Cookie Time.

You can imagine my horror then, when after selecting my cookie from the basket offered by the cabin crew, my husband looked over at the nice lady and declined. The wind fell out from beneath us and I felt the plane go into a nose dive, the tail spinning dangerously as we plummeted towards the earth. My hands reached out for my husband’s throat and I heard him gasp in surprise as I gurgled mariticidal threats without breaking eye contact. He submitted. The plane levelled up again.

I poked the hostess gently in the side just as she was finishing with the people across the aisle, before she had a chance to get away. “I’ve changed my mind,” my husband wheezed. “I’ll have that cookie”.

And that’s how you get two cookies on an Air New Zealand flight. He didn’t miss a beat when asked the same question on our next flight to Hamilton. Husband training can sometimes be a strenuous task, but I always find it to be well worth the effort.

He got his own back several days later, though, when we were picking up our rental car to drive back to Christchurch from Invercargill. Mark hasn’t driven much in London as there’s no need. Even though he’s a very good driver, he always gets a little anxious beforehand, like 30 years of experience is just going to fall out of his head. I was running late to meet him as we’d stayed in separate accommodation the night before. No reason for my tardiness, that’s just the way I operate.We should all know this by now.

Anyway, he was breathing fire and had obviously vented a little to the lady behind the rental counter desk. When I arrived I asked if we could move the fees over to my credit card, rather than his as I wanted all our expenses in one place for the points. While she organised this he went outside to start shoving our luggage into our vehicle. She gave a little smile and remarked at how “hard case” he was. I realised this was code for “that man performed an elaborate comedy routine for my benefit about what a giant pain in the arse you are”. LOL. Then she asked “is he your father?”. Double LOL.

No dear, that’s my husband. “Oh! You probably get asked that a lot”. No dear, you’re the first. Early morning customer service, huh? Oh, the giggles.

Well, our road trip up the South Island to Christchurch was fairly uneventful. We met old friends and family for a spot of lunch in Dunedin and we battled through the pouring rain for the rest of the journey.

The one spot of pure kiwi WTF happened near Waimate. Waimate is a small town of around 3,000 people just outside of Timaru. It’s an annoying part of the journey, far enough away from Christchurch to still have quite a bit of driving left on your plate, but far enough from Invercargill so that you’re thoroughly sick of the road. Mark was getting antsy. I was trying to keep him alert, awake (our body clocks were fucked) and happy with the cunning use of radio. Unfortunately, Mark had gone into classic grumpy old man mode and was lamenting “these bloody kids, is this supposed to be music, turn that racket off”. You know the script.

That’s when we passed the shed on the side of the road that begged us to go to Waimate. Apparently the turn off was in 6km, the bright yellow shed screamed. “Waimate, population 3000+, Hop in for a visit, there’s so much to see” proclaimed the thick black lettering. And there was a drawing of a kangaroo.

Seriously, what in the fucking fuck, Waimate? No, we didn’t turn off and we didn’t go visit. But I was puzzled as hell. A Google search told me that the illustration was probably a wallaby, not a kangaroo. Well, that would have been the first disappointment. I read that there are a bunch of wild wallabies in that area. Wild as in “not domesticated or farmed, they don’t take their shoes off when coming in the house and they aren’t properly toilet trained”. Not wild as in “they’ll show up with a keg, 6 tabs of ecstasy and seventeen people you’d like to have sex with on a random Tuesday night”. Boooooring.

Now, I don’t visit New Zealand in the hope of seeing kangaroos, that would be foolish, but I certainly don’t go out of my way to see frigging wallabies. There was a time in New Zealand when anyone trying to liven up any old piece of park land would plonk a bloody wallaby in there and leave it at that. Invercargill has had some in the park for ages. They might still do. They’re fine but dull creatures. I’ve seen enough.

None of my subsequent Google searches have been able to highlight anything else that would give credit to Waimate’s brightly boasted claim of “there’s so much to see”. I suspect they have oversold and will under deliver. That’s not the way tourism marketing is supposed to work, Waimate.

Perhaps I am wrong. I could well be, as I didn’t actually visit. Maybe if we had made that left turn and carried on to the small settlement we would have seen 3,000 townspeople in a picturesque setting all standing around a band of wallabies, each with knife strapped to its head chasing a Christchurch taxi driver with homicidal intent. Perhaps I really missed out.

Credit: Illustration based on graphics from:
Sheep by Freepik
Car by Freepik

My First Time In Paris