The year is 1999. I am a brand new teenager. A new single by a reigning pop princess is released and storms up the charts, accompanied by this video:

Now, by all means re-watch this video and reacquaint yourself with 90s Christina Aguilera. It has been 18 years after all. But if you just can’t face it I’m only going to be focusing on the first 30 seconds, before she even properly starts singing. So just watch that.

Right. You done? You saw the big room filled with cool hipster dudes and neon signs. Suddenly the girls storm in and start manhandling boys. One guy rushes over to “Paul” and gives him the heads up that “your girl’s here”. Why Paul needed this heads up, I’m not sure. Why he couldn’t see the entrance of the girls with his own two eyes is a bit of a mystery. Maybe Paul has that medical condition that makes it difficult to recognise faces and Blair or whoever wanted to avoid an embarrassing situation that would probably obliterate Paul’s fledgling romance.

These girls don’t seem like they’d take the slight of an unrecognised face lightly, medical condition or not. Blair’s right not to take a chance with this kind of thing. However, it’s even more likely that Paul is just a fucking idiot. So let’s run with that.

Blair needn’t have worried. Once Paul stands up his girl – Christina Aguilera – makes a beeline for him and tells him “I got something for you” to which he slickly replies “What you got?”

OH THE WITTY REPARTEE IS KILLING ME.

They walk together to the other side of the room; an incredibly awkward journey where Paul can’t quite grow the balls to actually put his arm around “his girl” properly. Check out the hovering hand at 14-15 seconds in. Ouch. Cringe. Hope you didn’t have any wet, unset makeup on your face coz that shit is crinkling up now. 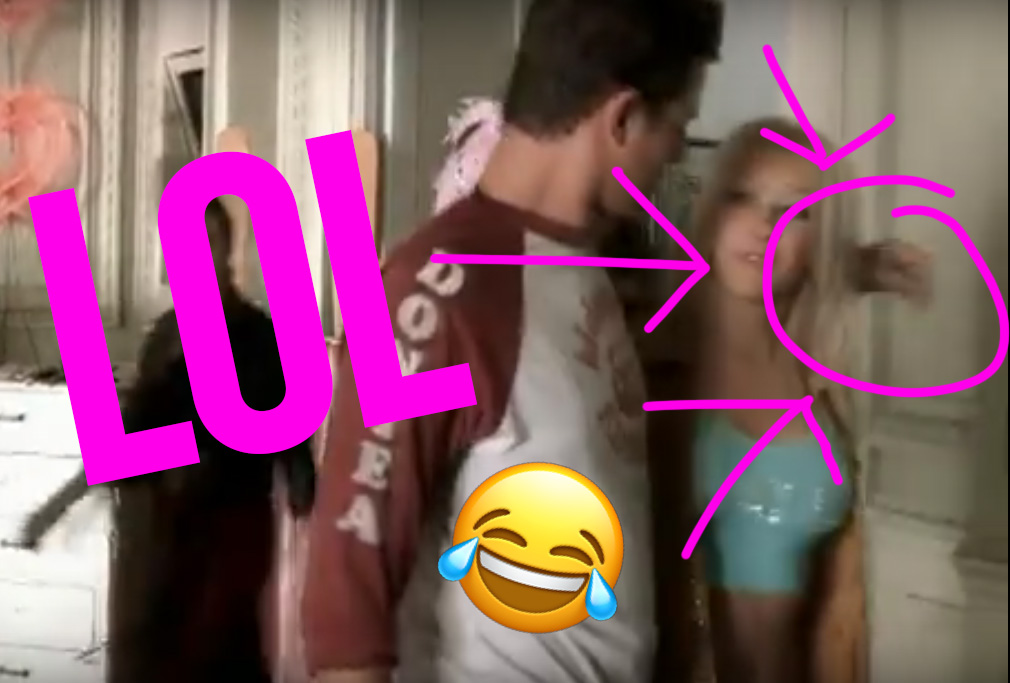 Anyway, Christina doesn’t want to tell Paul “what she got”. She instead tells him to shush. But it’s a sexy shush so he’s ok. She leads him to a couch and pushes him to sit, then starts to back away, telling him to close his eyes.

Paul doesn’t close his eyes. Instead he puts his hands over his face, like a five year old trying to covertly cheat at hide and seek. This again lends heavily to the theory that Paul just doesn’t understand how eyes work. Christina starts to walk away but when she looks back and sees him peeking through his hands she shuts that shit down. No, Paul. Your vision needs to be impaired for this.

I’ve set the scene now for the thing that has pissed me off for the better part of two decades. Paul is sitting on the couch with his hands over his face, now obscuring his eyes. Christina continues to walk a couple of metres further into the centre of the room where her snazzy dance routine is marked to start. Her back up dancers are already assembled there. At about 33 seconds in the music starts up and she begins singing What a Girl Wants and bopping around in the style of jiggly dance typical of the day.

AT NO POINT HAS ANYONE TOLD PAUL TO OPEN HIS FRIGGING EYES.

Think about that for a moment, please. What did she intend? That he was going to sit there blinded for the entire performance? That he’d miss the whole damn thing?!

Paul evidently realises that something visual is afoot, as we get a camera shot of his face at around 47 seconds in and his hands are down. We get a hint that he may have taken his hands down as soon as the song started, judging by the group shot from far back, but it’s definitely confirmed by 47 seconds. Christina Aguilera seems to be ok with this change of events as she keeps jiggling and warbling her way through the song.

So… what was the fucking point of all the “close your eyes” bullshit in the first fucking place?

If you tell someone to shut their eyes, it’s because you’re gonna set up a surprise or something and you don’t want them to see the set up. You want them to get the full value of the surprise when they open their eyes. Ergo, if she’d told him to close his eyes, then ripped off all her clothes to reveal some super amazing costume underneath that he then got to wow about when he opened his eyes, that would make sense. Or if he closed his eyes and she disappeared, so he opens them and wonders where she’s got to, only for her to reappear behind him and scare the shit out of him, that would also be acceptable. Or if she’d brought his dead grandmother back to life and taught her the jiggly dance with the criss cross knees and made her one of the back up dancers and only brought her into the room after he closed his eyes, that would add credence to the eye closing demand too.

But Christina didn’t do any of that shit. She stayed in the same leather pants and crop top get up and just moved a few feet away from where she was when he shut his fucking eyes. He would have heard her walking. There’s absolutely no value in his inability to see for those few seconds whatsoever. If he were a smarter man he would have spent the first half of that song looking bewildered.

I cannot explain to you how angry this makes me. When I first saw this I used to watch music videos while talking on the phone with my best friend, so we could do the important business of deciding what was cool and what was not. I remember yelling at the TV about this back then.

Recently I had a little twinge of nostalgia and headed to YouTube to re-watch some old videos. I remembered that something used to annoy me about this video and clicked that link to see if I could figure out what it was. Thirty seconds in and I was back to being livid.

It’s just empty plot with no conclusion. Why did it even happen? Why do I care so much?

WHY DID HE HAVE TO CLOSE HIS EYES? JUST FUCKING WHY.

That’s my therapy for the day. I feel a lot lighter now.

The two most annoying blog comments