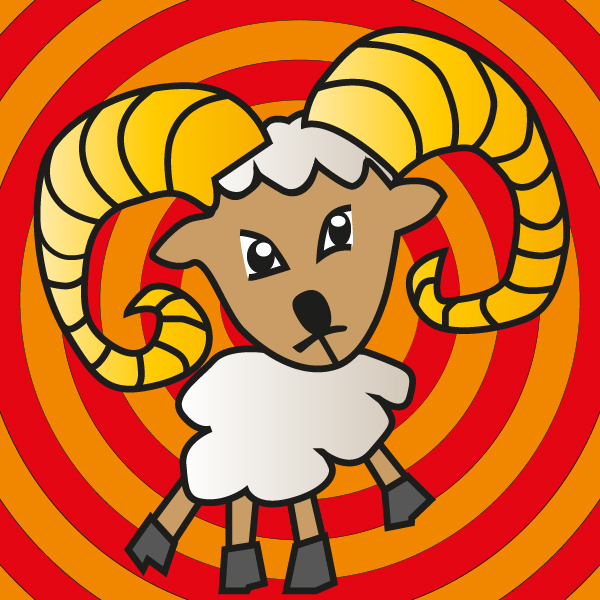 Yet another edition of “stuff that will definitely happen to you in April”. You will obviously find these warnings useful. Or not necessarily useful, but maybe interesting in the kind of way that makes you raise your eyebrows a little, then you catch a reflection of yourself raising your eyebrows a little in a reflection somewhere and realise that one of your eyebrows can raise slightly higher than the other one. This leads to a good five minutes of tugging and contorting your face into various shapes and grimaces until you have complete concrete evidence that your face is in no even slightly symmetrical and you will never be Cindy Crawford. Though, even Cindy Crawford isn’t properly symmetrical as she has that whole mole situation going on so maybe your droopy eyebrow isn’t so bad after all. There ya go. Good talk.

Aries
March 21 – April 19
You will try to do something artistic that you don’t  usually do (pottery, stained glass window, dying a hamster, that kind of thing). It will turn out weird and will deplete the supply of glitter in a 100km radius surrounding you for a good 5 months.

Taurus
April 20 – May 20
You will find a button on a wall. You will push the button. You will be ultimately disappointed.

Cancer
June 22 – July 22
You will download a new app and it will take over your life.  You have three weeks to get past level 71 (where your obsession begins to cool off) or you risk having your foot run over by a rickshaw as you amble through the streets not looking where you are going, just following the glow of your phone…

Leo
July 23 – August 22
You will put glitter in beards. Some people will not be as happy about this as you are. Screw them. You’re making the world a more sparkly and wonderful place.

Virgo
August 23 – September 22
You will inherit a lot of tweed and take to wearing it everywhere, but you will match it with leather and PVC bondage wear to give it a contemporary edge.

Libra
September 23 – October 22
You have two choices when it comes to hats: lampshades or tea cosies. Regular hats are right out of favour, you want to be different and stand out from the crowd.

Scorpio
October 23 – November 21
You will become pregnant. With pauses. Pregnant pauses. All the pregnant pauses in April. Conversations will be odd.

Sagittarius
November 22 – December 21
The pub will run out of crisps, so you will put on your entrepreneurial hat and nip down to the Co-op and grab a bundle, intending to sell them on the sly just outside the men’s room, out of eyesight of the landlady. This is when you learn two very important life lessons: 1 – people don’t want to buy crisps from the drunk, slurring person standing by the loo; and 2 – Waaaaaaay too many men do not wash their hands upon exiting the toilet. People are gross.

Pisces
February 19 – March 20
You will make a jelly in the shape of a dinosaur. This obviously leads to creating jelly Jurassic Park.