Recently I had business to attend to in Crystal Palace. By which I mean my husband had to meet an old friend for a drinking session and I tagged along. Anyway, I decided to drag him out of the house earlier than planned so we could see the Crystal Palace dinosaurs.

I had heard about the Crystal Palace Dinosaurs previously and remembered thinking, “THERE ARE DINOSAURS IN CRYSTAL PALACE!” I mean, who expects that? Apparently Crystal Palace is the best place in London to see dinosaurs apart from the Natural History Museum in Kensington.

I’ve put together these ten completely true facts about why you should go see the Crystal Palace dinosarus. Completely true as verified by me. On a whim. Co-signed by my cat. Who doesn’t exist. Oh well. 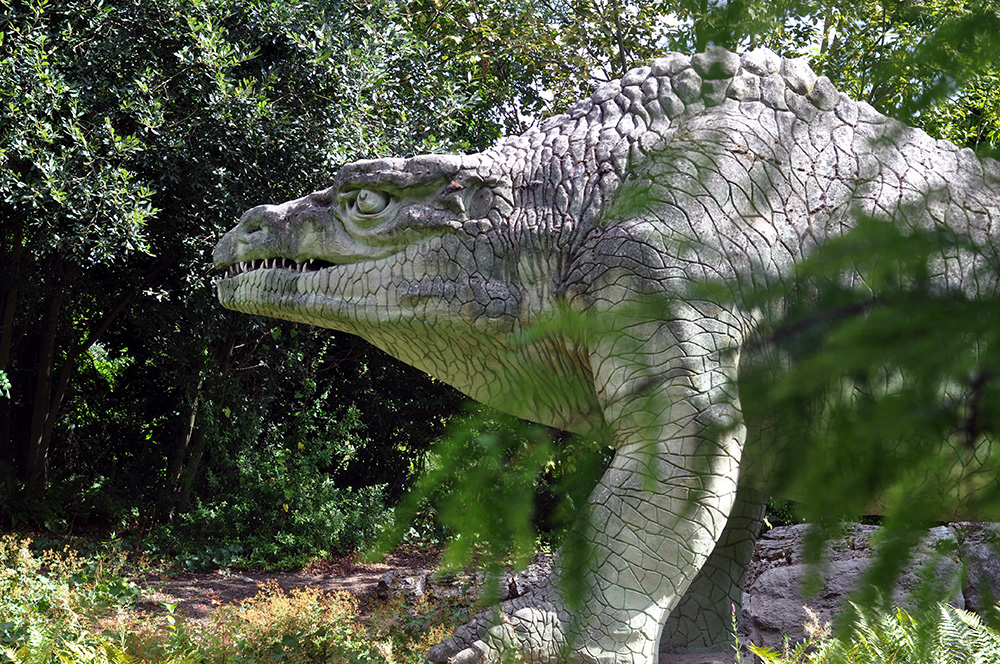 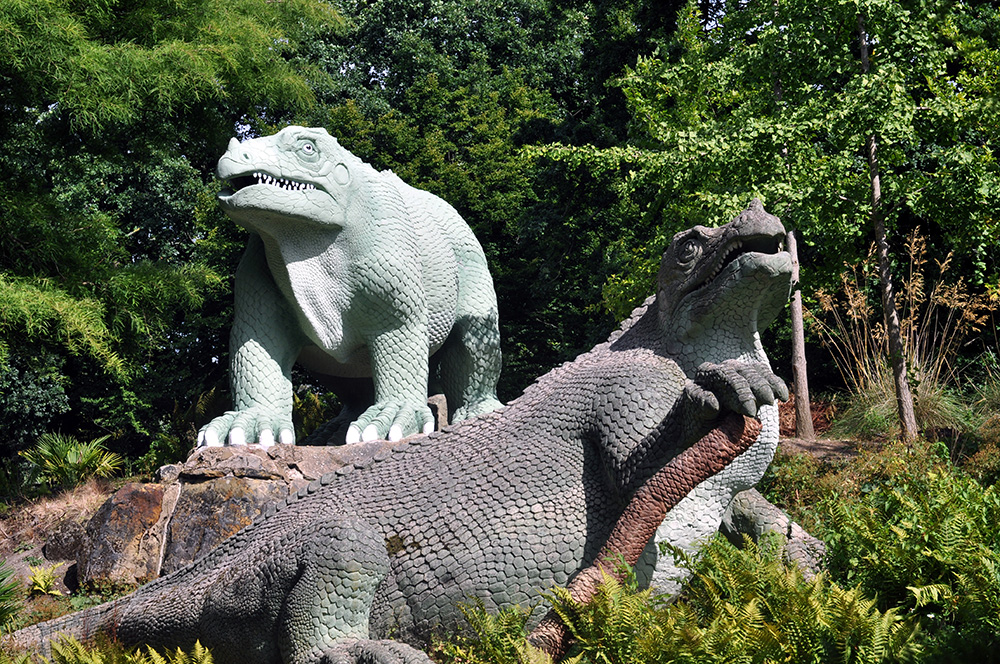 1 – Unveiled in 1854, these were the very first dinosaur sculptures in the world. Well, that we know of. Maybe one of the many people who had previously been digging up fossils and scratching their heads over their findings made a butter sculpture of their wonder beastie at breakfast one day, but screw them. Their artistic endeavour melted. These sculptures still stand.

2 – These models have two daddies. Benjamin Waterhouse Hawkins was Art Daddy; he did the actual sculpting. Sir Richard Owen is Science Daddy; he supplied Art Daddy with the latest scientific knowledge of the time. Unfortunately, the latest scientific knowledge of the 1850s is now wildly outdated, so Science Daddy is now Embarrassing Daddy prancing around the living room listening to outdated music in outdated in undies while you try to pretend it’s not really happening over in the kitchen. 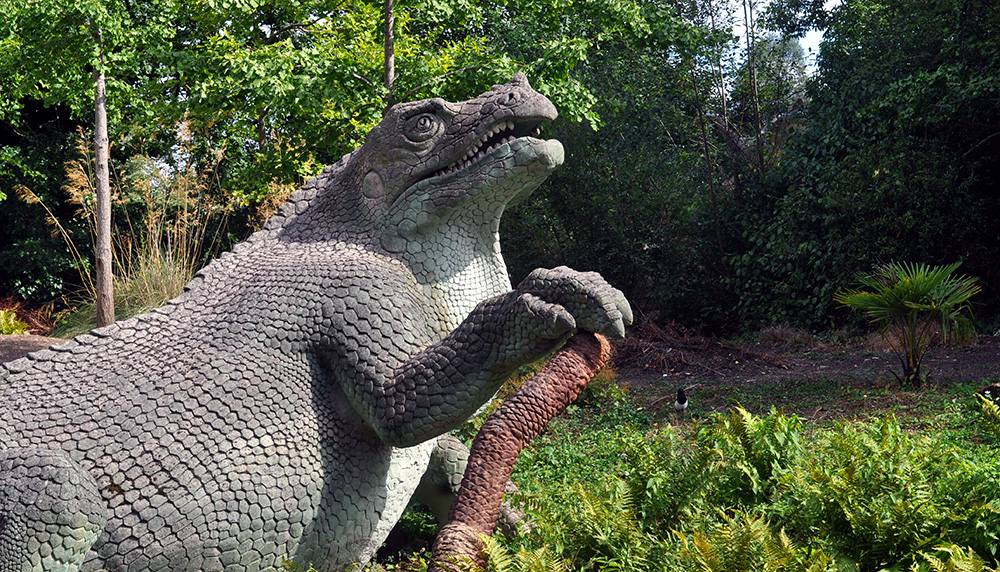 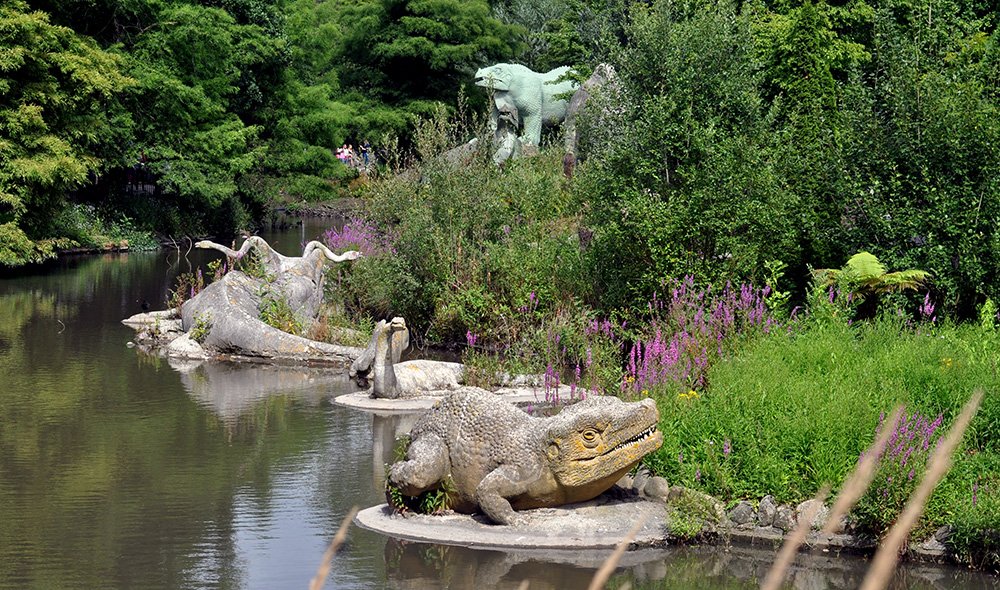 3 – They’re not all dinosaurs. Essentially it’s a a collection of sculptures of extinct animals. Some of them mammals. All of them dead and buried.

4 – The sculptures are hollow. To celebrate the completion of the sculptures a New Year’s banquet was apparently held inside of an Iguanodon. Ain’t no party like a dinosaur party. 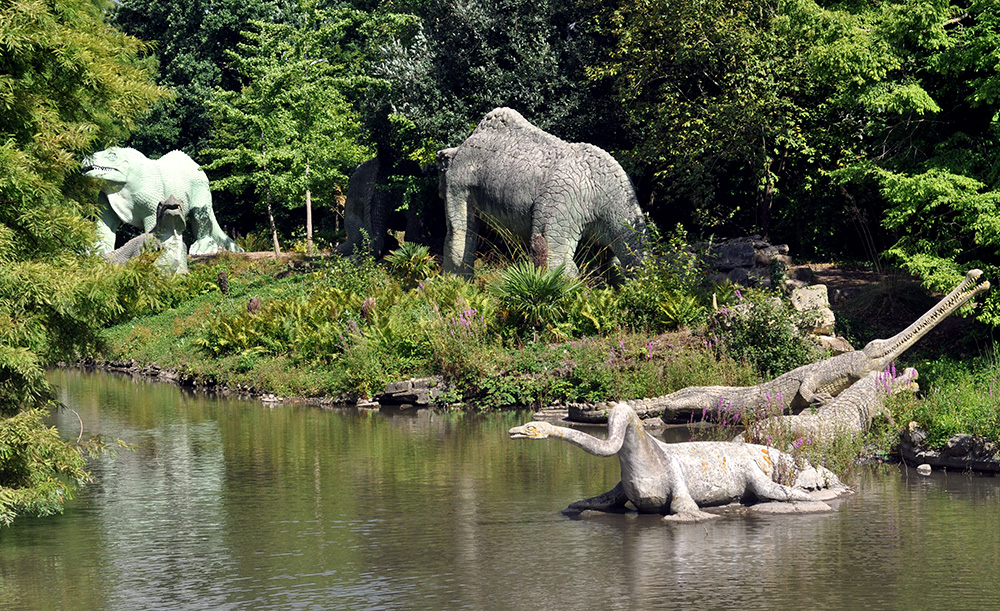 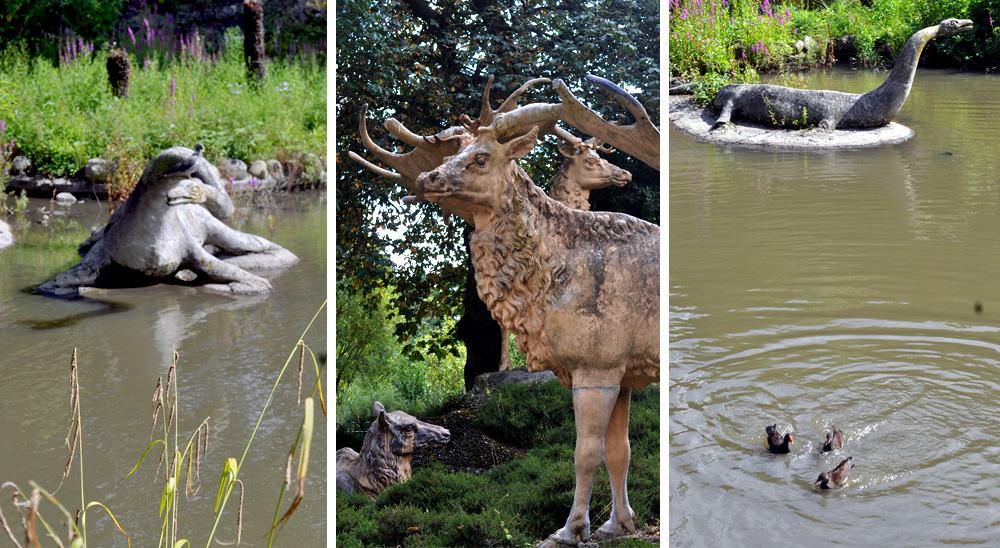 5 – Things started out well. The dinosaurs were supremely popular and all the cool kids wanted to hang out with them. That is, until an American by the name of Othniel turned up around 1895 talking all kinds of shit about our dino-friends. The conversation went something like this:
Othniel: These dinosaur models suck
Crystal Palace Dinosaurs: (imaginary) ROAR!
Othniel: OMG these dinosaurs are so out of date it’s embarrassing
Crystal Palace Dinosaurs: (phantasmal) GRRRRR!
Othniel: We totally need to stop paying attention to these shit dinosaurs
And at that point the person supposing the dinosaurs snappy responses ran off to get an ice cream or something, so Othniel won the fight. For now.

6 – Othniel’s sharp tongue cut deep and the dinosaurs had zero street cred. They became outcasts. None of the cool kids would even visit unless they needed to practice their egg throwing. The world’s first fake dinosaurs sunk into a deep depression. 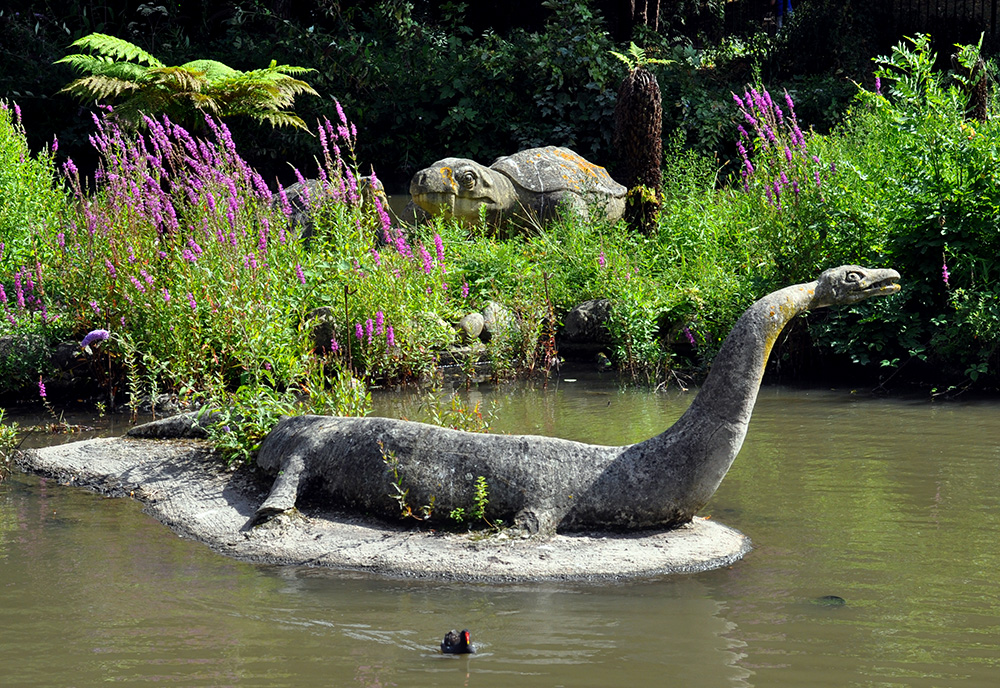 7 – Just when you thought it couldn’t get any worse, a fire broke out in 1936 destroying the nearby Crystal Palace. The dinosaurs hid away, taking cover behind some foliage. They were too afraid to show themselves for years afterwards, preferring to sob quietly in the bushes.

8 – In 1952 their saviour arrived in the form of a man named Victor, who decided to try and restore the creatures and move them around a bit. A ray of hope now shone in the eye of even the most ferocious historically inaccurate megalosaurus. 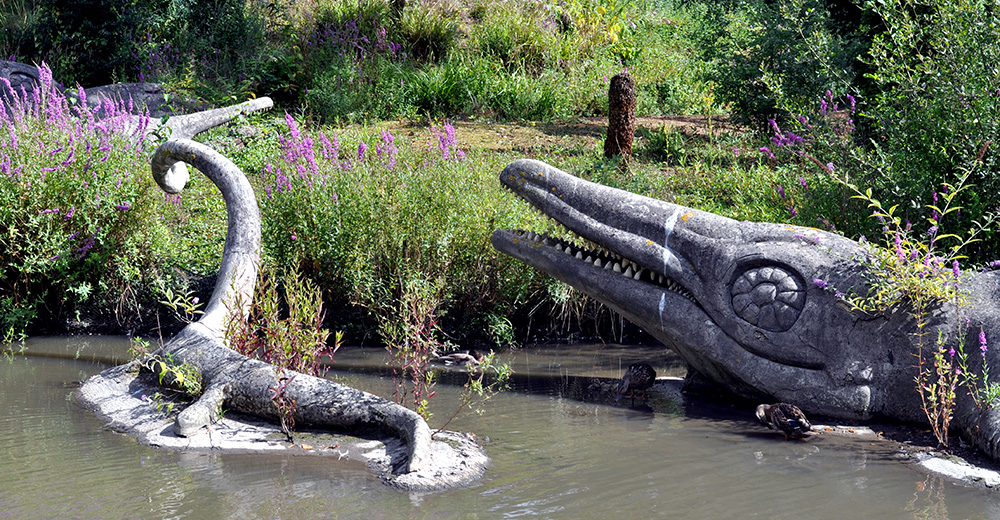 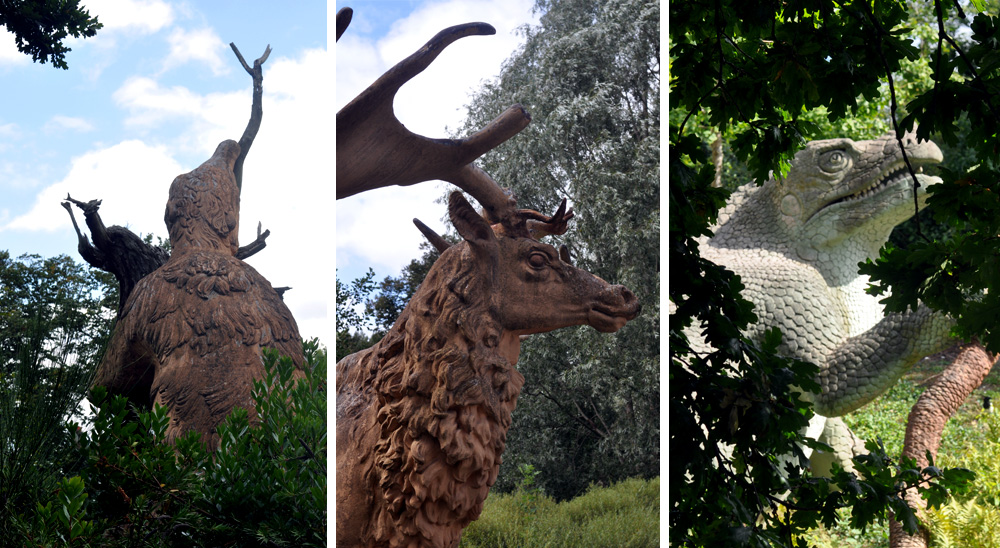 9 – In 2002 the metaphorical doctor was called in and the Crystal Palace dinosaurs and assorted non-dinosaur creatures received a full physicals. Damaged parts were fixed or remade. Rust (dinosaur cancer) was dealt with swiftly and garish, outdated paint was removed to make them feel pretty.

10 – The models are Grade I listed. Grade I, just like Buckingham Palace, Marble Arch and the Royal Albert Hall. Let that sink in. These dinosaur bitches have made it! 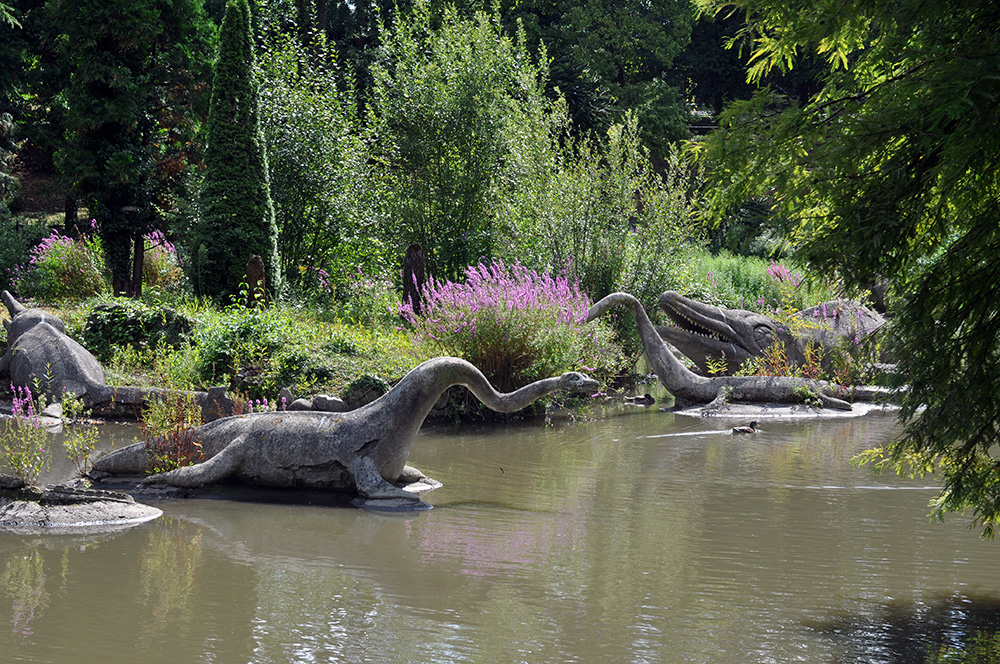 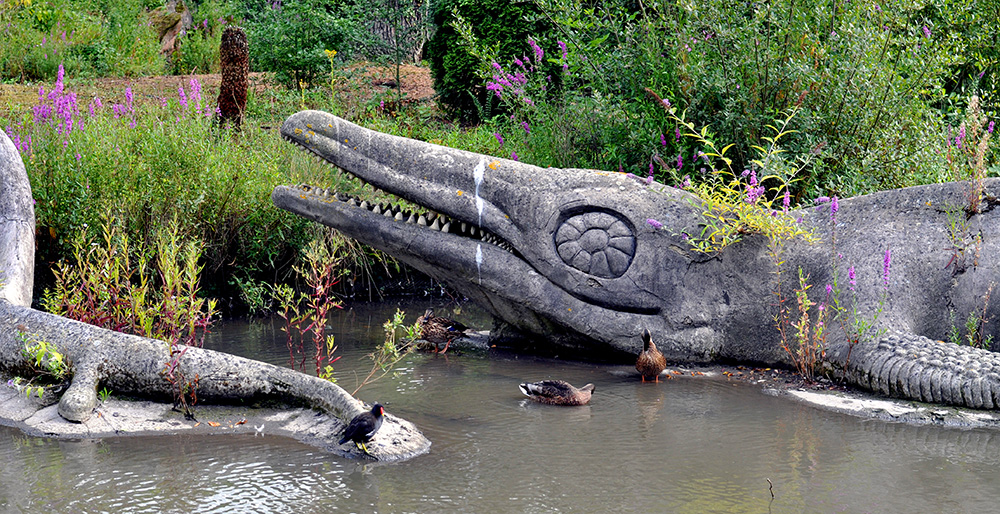 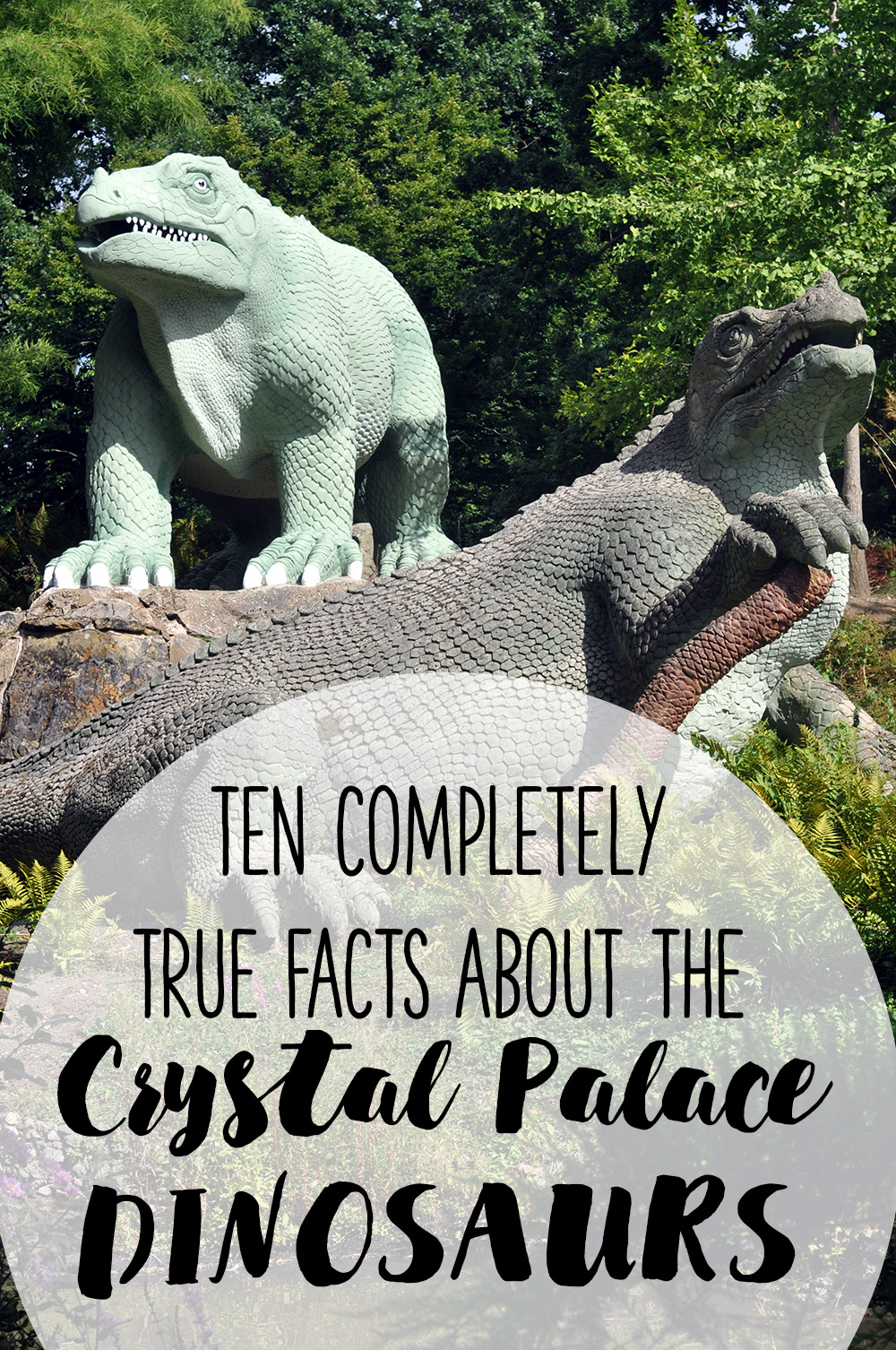